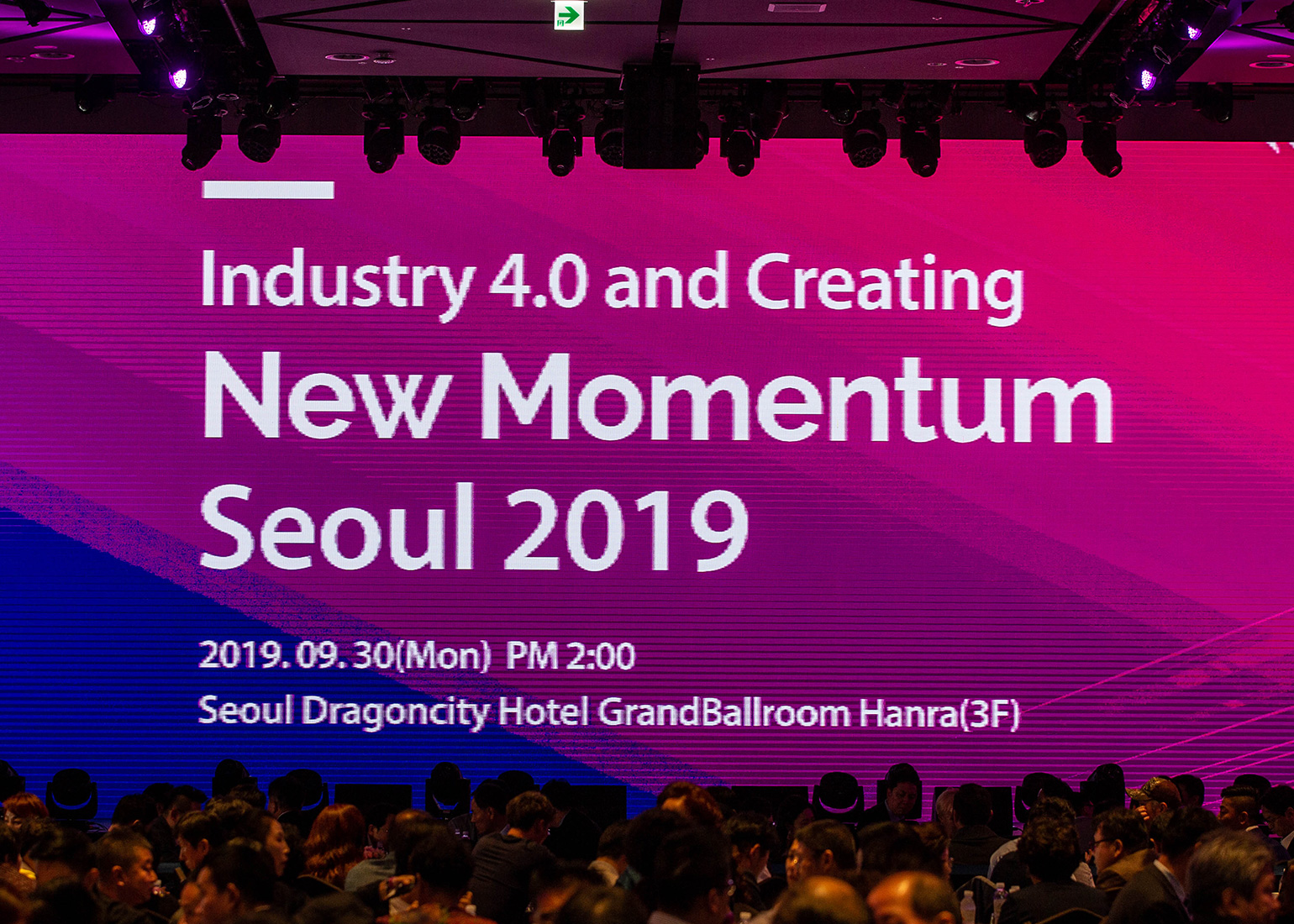 that includes game, beauty and fashion.

The KOK Foundation held "Industry 4.0 & Creating New Moment Seoul 2019" at the Dragon City Hotel in Yongsan-gu, Seoul on Sept. 30 and presented KOK Platform strategy and vision, introducing examples of promising sectors that were recreated by merging with existing industries during the Fourth Industrial Revolution.

At the first part of the conference, lawmakers from the ruling and opposition parties and representatives of major industries shared their thoughts and directions on future industries, while the second part of the conference focused on the KOK Platform, which was built on the technological prowess of innovation in the Fourth Industrial Revolution. 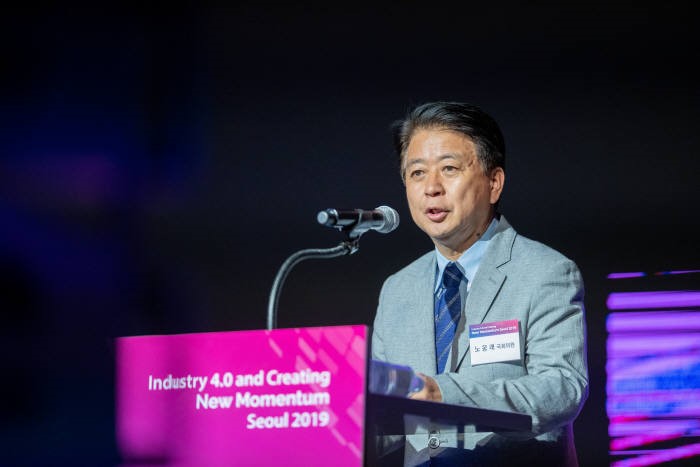 "Overall changes and innovations in society are taking place in the world where the Fourth Industrial Revolution and the contents industry interact together," said Woong-rae Noh, chairman of the National Assembly's Science, Technology, Information, Broadcasting and Communications Committee. He also stated that "since Korea is recognized as an IT powerhouse leading 5G (5th generation mobile communication), we should develop Korean contents industries by linking 5G technologies with K-pop, , K-drama and K-beauty at the parliamentary level, and will make efforts to foster blockchain and related future industries." 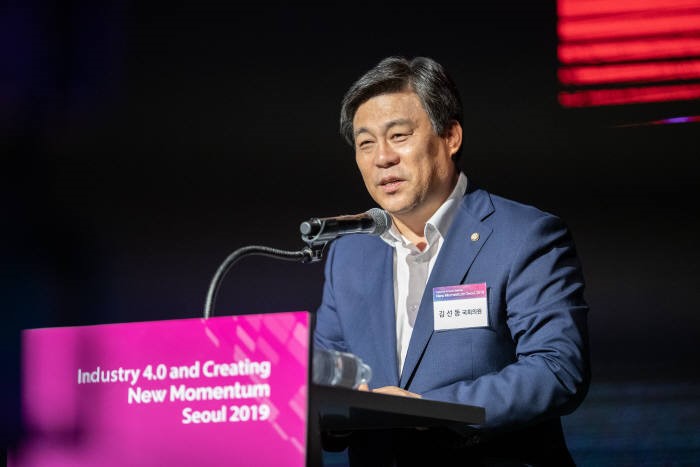 < Seondong Kim, a member of the legislative body of the Liberty Korea Party.>

"We highly appreciate the KOK foundation's new attempts, which encompass IT, cultural content and finance, as the era of convergence and integration is now," said Seondong Kim a member of the Fourth Industrial Revolution Forum at the National Assembly. He also added that "since artificial intelligence is far from human beings, we need to keep pace with the new era." and also mentioned that with an open mind toward the future, the government will work to promote and nurture blockchain-based technologies rather than regulate them. 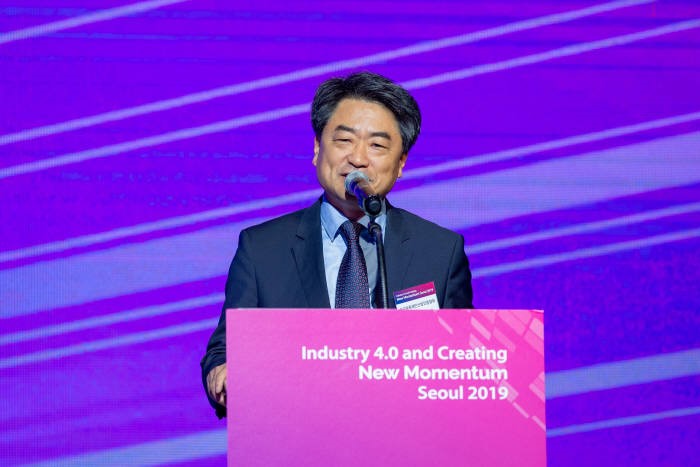 "We are pleased to take part in a meaningful position where we talk about the contemporary theme of 'Fourth Industrial Revolution and new momentum generation,'" said Hyeong Ju Kim, chairman of the Korea Blockchain Industry Promotion Association. "The Fourth Industrial Revolution will be followed by new agenda items such as data sovereignty and direct democracy, and we need to address that." It emphasized that related laws and systems should be reformed first along with development of blockchain, AI, and big data technologies, and public perception should also change. He stated that "it is very time-appropriate for KOK to make a new attempt to change people's perception by utilizing cultural content." 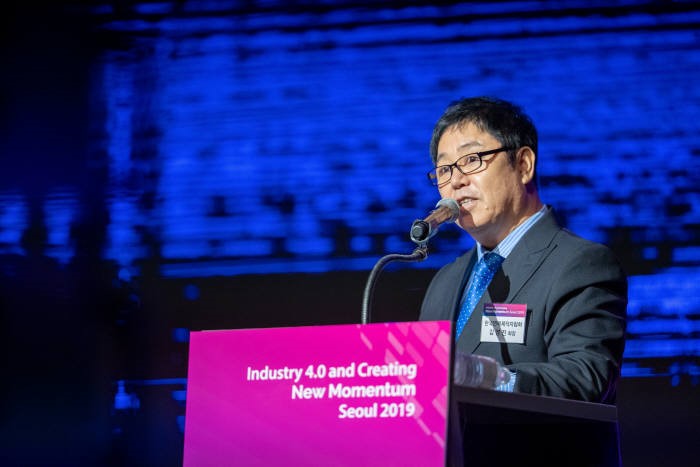 "The KOK Platform is one that can play a role in making Korean Wave globally beyond Asia," said Yeong Jin Kim, chairman of the Korea Entertainment Producers Association. He also said that "2e will help not only Korean content but also play in the global content production industry." 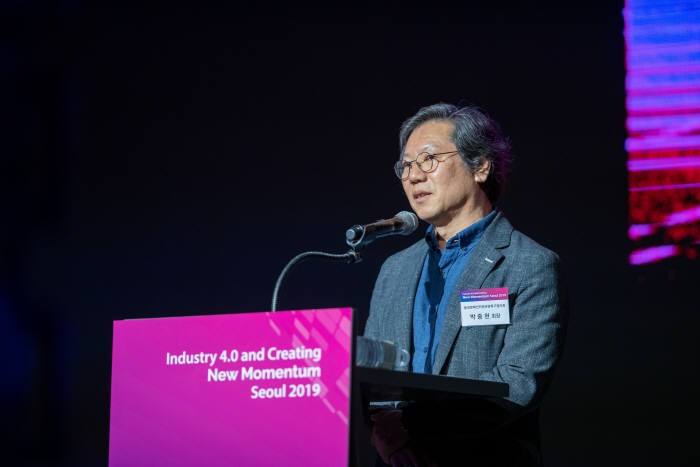 "It is a very important change for modern society that our distribution is connected to the KOK Platform and we are looking for new changes." said Jung-Hyeon Park, chairman of the Dongdaemun Fashion Town Tourism Zone Association.. "Unlike before, customers come to Dongdaemun directly and buy goods, but we are still working as a distribution hub, and we expect the KOK Platform to paly a role for s the smooth connection with consumers at home and abroad who use Dongdaemun." 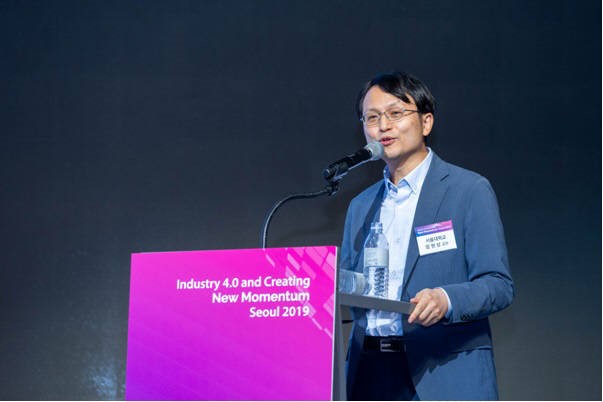 "Unlike previous industrial revolutions, the Fourth Industrial Revolution is replacing mental labor," claimed by  Hyeon-Sang Eum, a professor of computer science at Seoul National University. ," Professor Um stating by suggesting a way to expand the future entertainment industry that iIt is very important to create converged content on a KOK Platform that provides contents based on the entertainment business 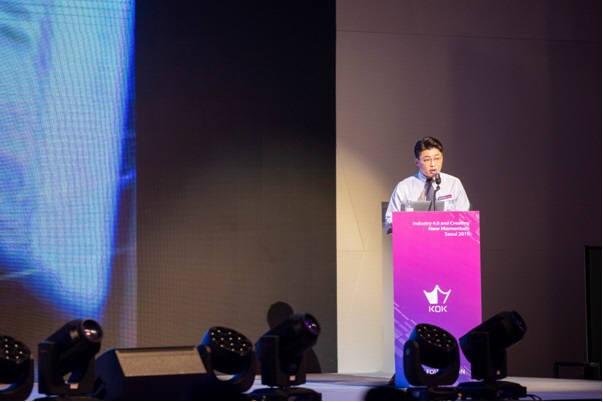 "The digital music market is growing at a rapid pace every year," said Cheol-gu Shim, CEO of TOWB Music. "By providing a service that is differentiated from existing music services, we promised to play a role as a "DApp" that provides music-related content within the KOK Platform. TOWB Music makes it easy to reveal your music sources anywhere in the world with an automatic sharing algorithm based on Blind Music Competition. 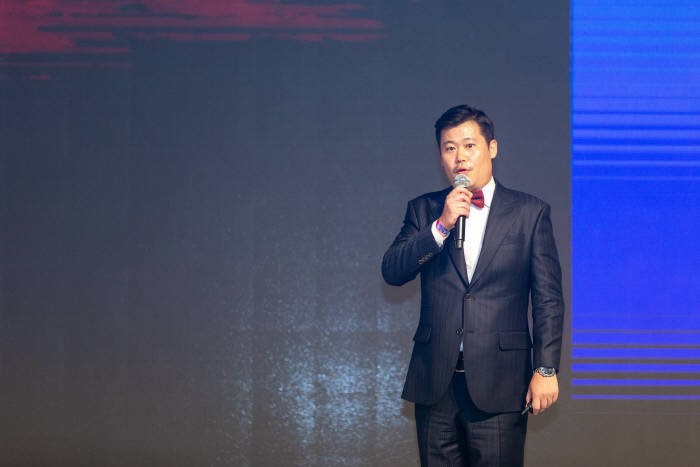 In the second part that followed, a full-fledged showcase for the KOK Platform was held. Since a long time ago, I have been producing Korean and china drama OST that are famous around the world, and numerous music. I unveil the KOK Platform based on the success of the drama production and creation of various contents. " said Dong-seop Hwang, CEO of the KOK Foundation and head of the GrooveEntertainment. He then said that as a single content platform, the KOK Platform will form a platform including games, music, dramas, movies, influencer and e-commerce.that can be used by people around the world easily and comfortably access at once. 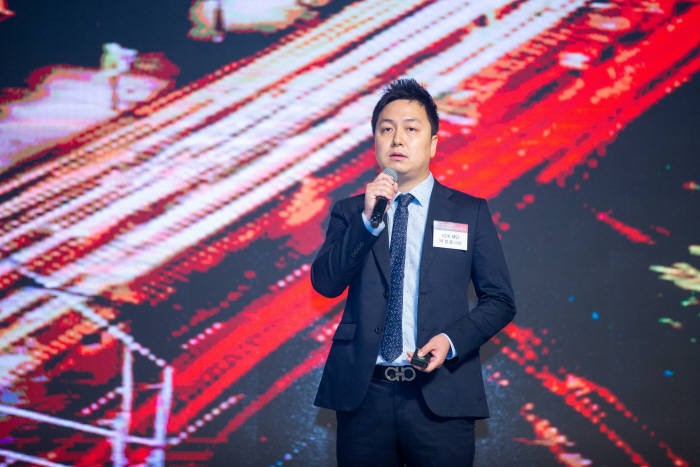 "We have platforms such as Naver, YouTube, Baidu, and Netflix that we use almost every day, but we have only encountered limited content through limited platforms." said Chief Security Officer Sung-jun Park of KOK Platform. "Unlike traditional platforms that share limited content, the KOK Platform not only shares content but also allows us to receive legitimate profits through blockchain, so that many of our content can be used as a wider and fairer decentralizing content for many users and creators. 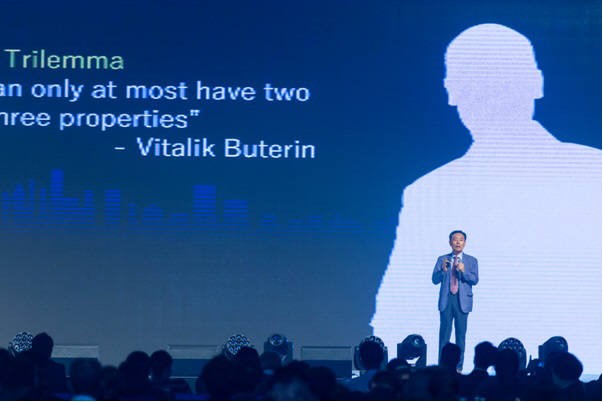 Young-Kyu Choi, CTO of KOK, pointed out the existing blockchain problems and emphasized that better blockchain technology will be applied to the KOK Platform. He stated that “(In the KOK Platform) a number of dDApp will create an environment that can operate.” He also said, " As Vitalik Buterin, the founder of Ethereum said while blocks pursuing a 'decentralization,' 'security,' and 'scalability' all three issues arenot easy to solve. "KOK Platform that 4th generation blockchain will be developed by utilizing AutoXML technology that automates exchange of data standards by protocoling with advantages of current 1st, 2nd and 3rd generation blockchain." He also mentioned. "we will not program the smart contracts that composes DApps, but allow many developers and users to conveniently develop and use DApp within KOK Platform."

Regarding block-generating nodes, CTO claimed that, " The DApp representative will play a representative role as a node, rather than in the form of a block producer with many tokens, like the existing third-generation blockchain, selecting nodes through staking.," adding, "the representative will be able to process a large number of data generated by DApp in the fastest and most stable manner by creating an consensus  on distributed ledgers."

"We will create P2P browsers that can view transactions of DApp(KOK shopping malls, content media, games, etc.) anywhere in the world to enhance transparency in transactions and ultimately create 'WWBW' (Worldwide Blockchain Web)' beyond 'WWW(World Wide Web)'," he said. 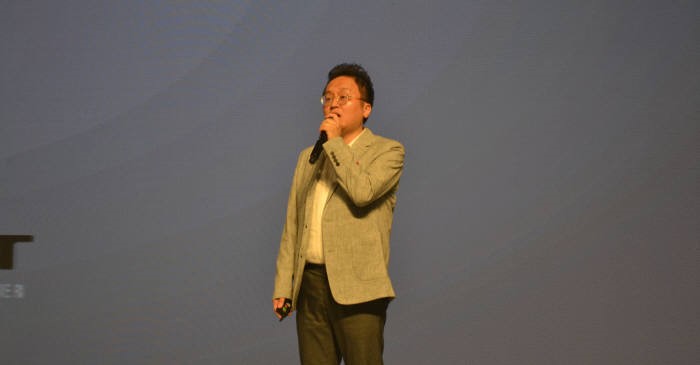 Ji-won Kang, CEO of Super Acid, which oversees the game business division in Korea, has already declared that the game "Magia," which is being serviced in 130 countries, will be opened on the KOK Platform. In addition, a variety of games will be added to the KOK Platform one after the other. In addition to providing its own games, the company also announced its plan to provide open data on the KOK Platform so that outside developers can make good games, and use the AI system held by KOK to identify demand and find suitable consumers to supply games.

Users can easily and comfortably pay using KOK Token, the cryptocurrency within the KOK Platform, and developers will be able to meet users at a much lower platform fee, rather than offering nearly 30 percent of the fees paid to existing platform such as Google App Store.

The conference became a venue to discuss the shift in awareness of the Fourth Industrial Revolution and the right direction in which blockchain technology should be utilized in time for the fast-changing era. Experts say that blockchain technology is needed to lead the Fourth Industrial Revolution for the spread of various Korean contents, distribution of products, and distribution of Korean Pop culture contents nationwide,. Representatives from various industries agreed that the KOK Platform will playat the center role of this future.

The KOK Platform was also a venue for sharing the vision that the company will plan and create a global content platform, rather than just  a simply traded cryptocurrency in the market.   At the conference, KOK Platform shows t global service in a variety of ways, including culture, arts, content, games and finance, by utilizing the advantages of blockchain, "transparent distribution of wealth" and "exchange convenience."

Experts cited the lack of cryptocurrency usage as the main reason of failed blockchain projects. KOK Platform, a converged platform based on actual business models, combines cultural contents, games, and finance with blockchain to effectively utilize cryptocurrencies and serve as a platform that can be conveniently consumed and accessed by people around the world. Therefore, KOK proved at the conference that this expectation is possible as converged platform.