The price of Bitcoin, which was around 7 million won, rose sharply and exceeded 9.5 million won in just 2 weeks.  There may be various reasons, such as corona19 pandemic, but most of all, the expectation for scheduled halving in mid-May is probably the biggest cause.

For your information, a halving of bitcoin refers to a half-decrease in block reward that occurs about every 210,000th block of bitcoin in every four years. Now there are 12.5 mining rewards after two halving  cycles so far. After the halving that is scheduled for May, the reard will be reduced to 6.25.

The reason the price rises before the halving is simple.  Because it has been like that all along.  The graph below shows the price of Bitcoin from 2011 to the present. In fact, you can see that the price has been rising remarkably around the halving of 2013 and 2017. 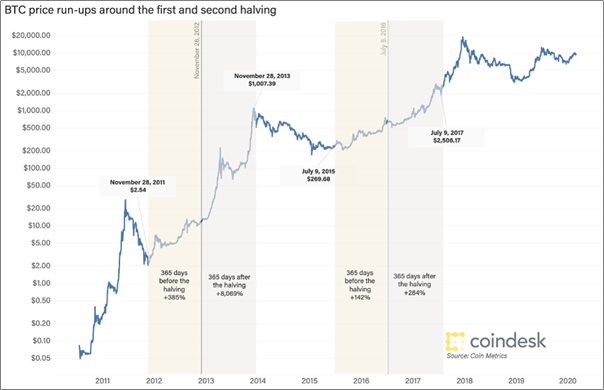 So why is the price going up around the halving?

Michael Dubrovusky, co-founder of PoWx, a non-profit mining organization, stated that "theoretically, as the amount of bitcoin that miners can sell decreases, the amount of bitcoin that consumers can purchase also decreases." The price of Bitcoin, whose block compensation is halved in four-year cycles, is inevitably to rise. Unlike the dollar supply, which has tripled since 2000, as the central bank regulated the supply of currencies.

In particular, as the central banks of each country are implementing ultra-low interest rates and quantitative easing strategies to defend against the economic downturn caused by the Corona 19 pandemic, bitcoin has become more spotlighted as a means to avoid inflation. As the result the expectations for the third halving in mid-May has gradually increasing.

How much will the price of bitcoin go up?