KOK PLAY that aims to be an integrated platform for blockchain-based digital content, which is the core business of the promising future, attracted the attention of Chinese investors as well. 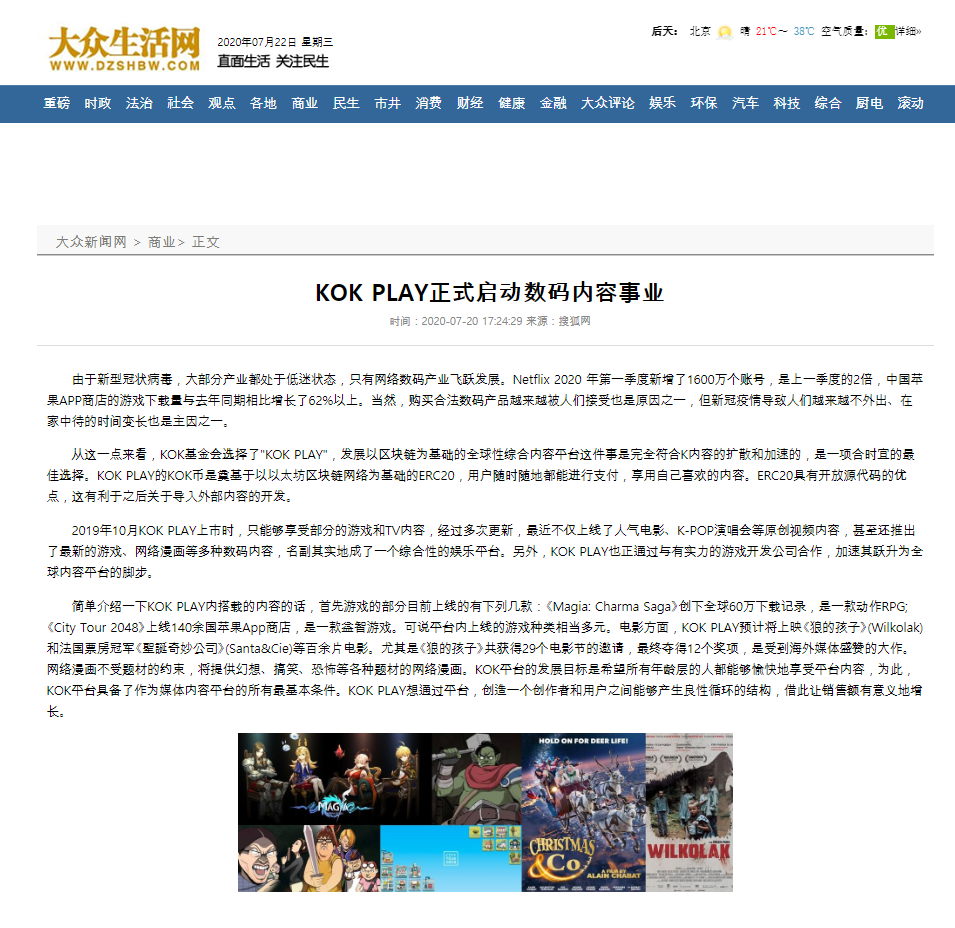 DaZhong NEWS, a renowned media in China, made headlines about the KOK Foundation's bold move under the title " KOK PLAY officially launched the digital content business."

The article was shared by numerous media in China less than 10 minutes after it was published, which proved China’s great attention to KOK PLAY. 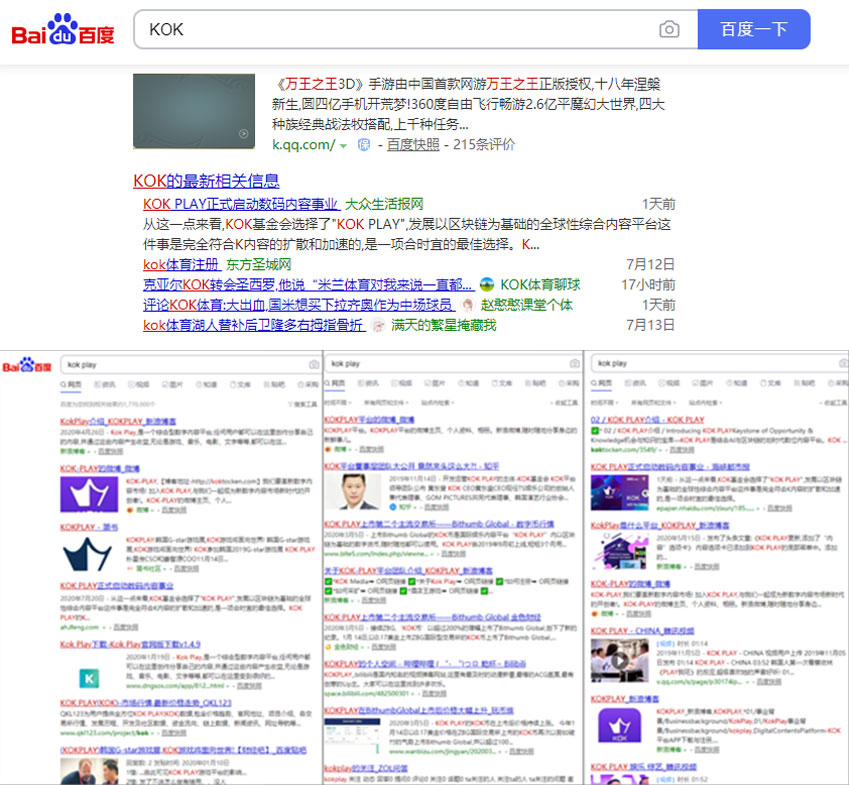 In addition, it is now possible to easily find information regarding KOK PLAY such as listing news, white paper, and various activities of users on major Chinese portal sites. When searching ‘KOK PLAY’ in Baidu, a Chinese Naver, information can be found in Chinese in a diverse form of media including news, blogs, and video.

KOK PLAY gradually raises its awareness and expands business globally beyond Korea. In particular, KOK is expected to be positively considered in China through this article.

With the COVID-19 pandemic around the globe, China is preparing for the post-corona virus. As a result, the direction of China's recent policy is more focused on untact (new consumption propensity without contact), and future industries such as blockchain and artificial intelligence. KOK PLAY will emerge as a perfect new business for this era. In addition, KOK PLAY will make a new leap forward by taking advantage of the time when the two countries gradually start to make reconciliation and harmony. Please look forward to the growth of KOK PLAY

With most industries suffering from the COVID-19 pandemic, only the online digital industry is on the rise. Netflix recorded 16 million new accounts in the first quarter of 2020, twice the number of the previous quarter, and the number of games downloaded in the Apple App Store increased by more than 62% compared to the same period last year. The tendency of purchasing digital content legally may be one of the reasons for the rise. However, mostly it might be affected by COVID-19, which makes people to have external harder and to spend long hours at home.

In this regard, the KOK Foundation's choice of the blockchain-based globally integrated content platform "KOK PLAY" seems to be appropriate for this time along with the spread of K-content and accelerated untacted life. KOK PLAY mainly uses KOK Token based on ERC20, which is based on Ethereum Blockchain Network, to make it easy to pay for content anywhere in the world. The advantage of ERC20 being open source is that it is easy to develop external content in the future.

At the first launch of the KOK PLAY in October 2019, only some games and TV content could be accessible. However, it has recently been transformed into an integrated entertainment platform through several updates that provide not only original video content businesses such as popular movies and K-POP concerts but also various digital content such as the latest games and webtoons. KOK Foundation also spurs for stepping up to become a global content platform through collaboration with competent game developers.

To briefly introduce the contents featured in KOK PLAY, games of various genres are accessible. The first game is the action RPG 'Magia: Charma Saga', which recorded 600,000 global downloads, and the casual puzzle game “City Tour 2048” featured in 140 countries of the Apple App Store. In regards to movies, KOK plans to service more than 100 films achieved box office success and cinematic quality such as "Wilkolak," invited to 29 film festivals, won 12 awards and received outstanding reviews from foreign media, and, Santa & Cie, the No. 1 winner in the French box office. Webtoons will be serviced regardless of genres such as fantasy, comic, and horror as well. KOK Platform is developing into a platform that anyone of all ages can enjoy and contain a solid base as media content. Moreover, as the platform creates a virtuous circle between creators and users, sales are also expected to grow significantly.

The reaction in the cryptocurrency market is also getting hotter as the KOK Foundation is starting a digital content platform business. Following the listing on global major exchange ZBG in January this year, KOK showed a series of listing on Bithumb Global in March as well. KOK also shows growth as a stable service to build KOK’s own ecosystem rather than to operate only a platform business. The increasing volume of trading and maintaining the ICO prices, it proves that KOK Token is receiving great attention from users.

A KOK PLAY official said, "The problem with the current platform business is that the nature of the content market is being distorted as the contents that fit the tastes of platform operators instead of users or spend a large number of advertising expenses are exposed on the top. Our objective is to face this problem and to present a blockchain decentralized platform KOK PLAY to the market in order to provide users the ultimate content that they actually want to enjoy. As KOK is scheduled to be listed on the global major exchange in the second half of this year, we will continue to update the KOK PLAY so that users can enjoy various contents of KOK PLAY anywhere in the world. Please contact us if you have good content.”.